Climbing Through Useless Debris: In Conversation with Andrew Kovacs

Paprika! in conversation with Andrew Kovacs, founder of Office Kovacs (OK) and Archive of Affinities, on November 3rd, 2019.

Paprika!: Do you think there are certain fetishes in contemporary architecture? What would you call your current fetish, if you have one?

P!: Let us rephrase. We’re claiming that there is a tendency towards obsessions in the field of architecture. First, would you agree that we all have fetishes?

P!: And to that point, what would you claim yours is?

AK: Lately I’ve been looking at a lot of outsider art and architecture. Do you know Watts Towers in Los Angeles? It’s by Simon Rodia, these conical towers that he built himself. So I’ve been sort of revisiting that aspect of things that are fetishes, to use your term. In the project of Archive of Affinities (AoA) I collect all these different types of things. And one of them, the fetishes, would be things like architecture made by people that were not trained as architects. So I think that outsider art and outsider architecture is in that world.

P!: We just had a mini debate because one of us thought you were photoshopping the ads in AoA.

AK: I am photoshopping them. But they’re real advertisements that I scan from architecture journals and magazines, and through photoshop I basically just delete. I delete gratuitous copy and try to bring it back to the punchy image. So if you really look carefully at the advertisements that I share, you’ll see that the overwhelming majority of the time you can’t tell what company is selling that product. You can tell what the product is, but you don’t know the company. So it’s removing the brand or that aspect of the marketing. All of this to say that the advertisements are reduced to the punchiest image, so to say.

P!: That segues into our next question because we’re interested in Instagram as a medium through which architecture is communicated, but we see it as promoting a certain kind of fetishization. Do you agree, and if you do do you think it’s at the expense of something else?

AK: Let me ask you, what’s that certain type of fetishization?

P!: It’s obviously based on visuals but it’s also about the speed of the scroll, so it’s about catching people’s attention within seconds.

AK: I think there’s an aspect of that, but there’s also Instagram accounts that don’t post so frequently. I would say that that type of content is way more curated and less instant, so to say. I halfway agree and don’t agree—there is this kind of immediacy. And I think that’s productive in some sense, but I don’t know what the opposite position is. Just because it’s fast-paced and in the moment, that doesn’t necessarily equate to shallowness. But I would love to hear the alternate position that would make that argument. And if it’s just because of time, because it’s instant, I don’t know if that’s valid because the Internet is such an amazing presence in our daily lives—it’s always there.

P!: Back to your advertisements and AoA, when did that begin?

AK: The advertisements project began by accident, but it’s a continuation of the thesis project which is AoA. I was working on the project of AoA and then accidentally realised there are all these advertisements. I was looking for things that are like the architecture of the aberrant, or what I call ‘architectural b-sides’—not the hits, not the canon. So I was going through all these books and then I started going through magazines, and then I saw all these advertisements, which made me think of the famous Bernard Tschumi project, advertisements for architecture, where he produced advertisements which weren’t real, like, “to fully appreciate architecture you have to commit a murder.” So at first I found a visual affinity between real advertisements published in architectural journals from the same time period that Tschumi’s project existed, and the more I kept looking for them I realised ‘oh, they’re kind of funny’, they’re staged in a certain way, they amplify the products in a certain way, they produce these surreal scenarios, and while doing all of this, the really good ones also address disciplinary concerns like inside and outside, artificial and natural, the mundane and the glamourous, real-fake, etc, etc… Through them, you could extract a kind of disciplinary argument, even though they were all one-offs, and all to sell a product. There was also an immense quantity of them, which I found super fascinating. So I went through and tried to find the ones that I appreciated the most.

P!: It sounds like you essentially made your own thesis project. We keep bringing up thesis because we’re trying to question the importance of thesis, which we don’t have here at Yale. Did you go through thesis—which we understand as a space to foster obsessions—and is there a connection between your thesis project and your current career?

AK: Absolutely there’s a connection. Well, I did two thesis projects, one as an undergraduate and one as a graduate student. In between, I had worked for a number of years. My graduate thesis included the project of AoA, but as a design project it became this colossal mountain of useless architecture sited in the geographic center of the United States where the users would be architectural mountaineers climbing through useless debris. In this world, there were no building codes—you could essentially do whatever you want, no matter how outrageous or minimal it may be. And in order to make representation of this idea I used the content of AoA, so I reassembled these b-sides I was already collecting at the time and turned that into a design project. So there was this aspect of collecting things, finding things, gathering things, and then taking that material and using it to generate a design. And that continued in terms of collecting physical objects and producing physical models from those objects. But then also documenting and archiving them and producing digital collages from that archive, and going back and sharing them through the Internet.

So that was my thesis. Now, in terms of the question of the role of thesis and whether architecture schools should have thesis, it’s a strange one. I sort of set out to do a thesis. I feel like today when architecture students go to school, they don’t fully get what a thesis project in architecture might be. For me a thesis project is something you can continually work on—it doesn’t have an end. It continues to keep developing, and hopefully in a productive way. AoA, in that sense, started by accident, because it was an easy way for me to collect images, and then eventually was mobilized into something I used to produce design.

AK: Sure… Here’s how I’ll answer that question. I see it as like a boy band or a girl group. You know? I don’t know, there was Destiny’s Child, and there were three members, and then one of them becomes Beyonce…So that’s how I see it.

P! : But do you think it’s important to have Destiny’s Child for Beyonce?

P!: Can you tell us about your most recent project at Coachella and the influences behind it, and how you feel about the resulting experience you saw people having with the installation?

AK: So, the project only lasted two weekends, but believe it or not the conversation started over a two year period. From conversations, to design proposals, to fixing the direction, to refining direction, to finally being allowed to build it. It’s somewhat nice to think of the dichotomy. In respect to the instantaneousness of the project, it was a very long thing that had a very short, immediate impact. The idea was basically these seven colossal architectural sculptures that took the form of cacti that each had a different colorful face and were arranged in a spiraling formation as a gateway or meeting point in the event grounds. We were aware that people go to Coachella to take selfies. I had personally never been to Coachella, so I had to figure this out through the Internet. Like, “Everyone goes to this place to take selfies…”, I get it. And so that, in terms of a reference, was something like the Paul Smith wall in West Hollywood, this designer store with a pink wall on the outside that everyone goes and takes selfies with, and I love that because it’s people, everyday people, engaging with architecture in a different, new kind of way. For a long time I’ve also been thinking about the leaning tower of Pisa and all these images people choreograph to pretend they’re holding up the building. Doing the project of AoA, you see the leaning tower as a recurring thing—it’s in advertisements, famous painters have painted it, there are patents for it in the United States, endless quantities of souvenirs are produced of it. The most important thing about it, the fact that it’s falling down, is an error in architecture—the best thing about it is something that’s wrong. The thing that allows it to succeed in this crazy way…And so I love that about it too. So that mixed with the Paul Smith wall and my fascination for everyday, recognizable objects as architecture, all mixed into the event that is Coachella, allowed for this amazing moment where thousands of people just went and took selfies with it. I went to the event both weekends and I’m sitting there and it just felt like a mosh pit of selfies—and i’m like, this is awesome! This is fucking awesome. 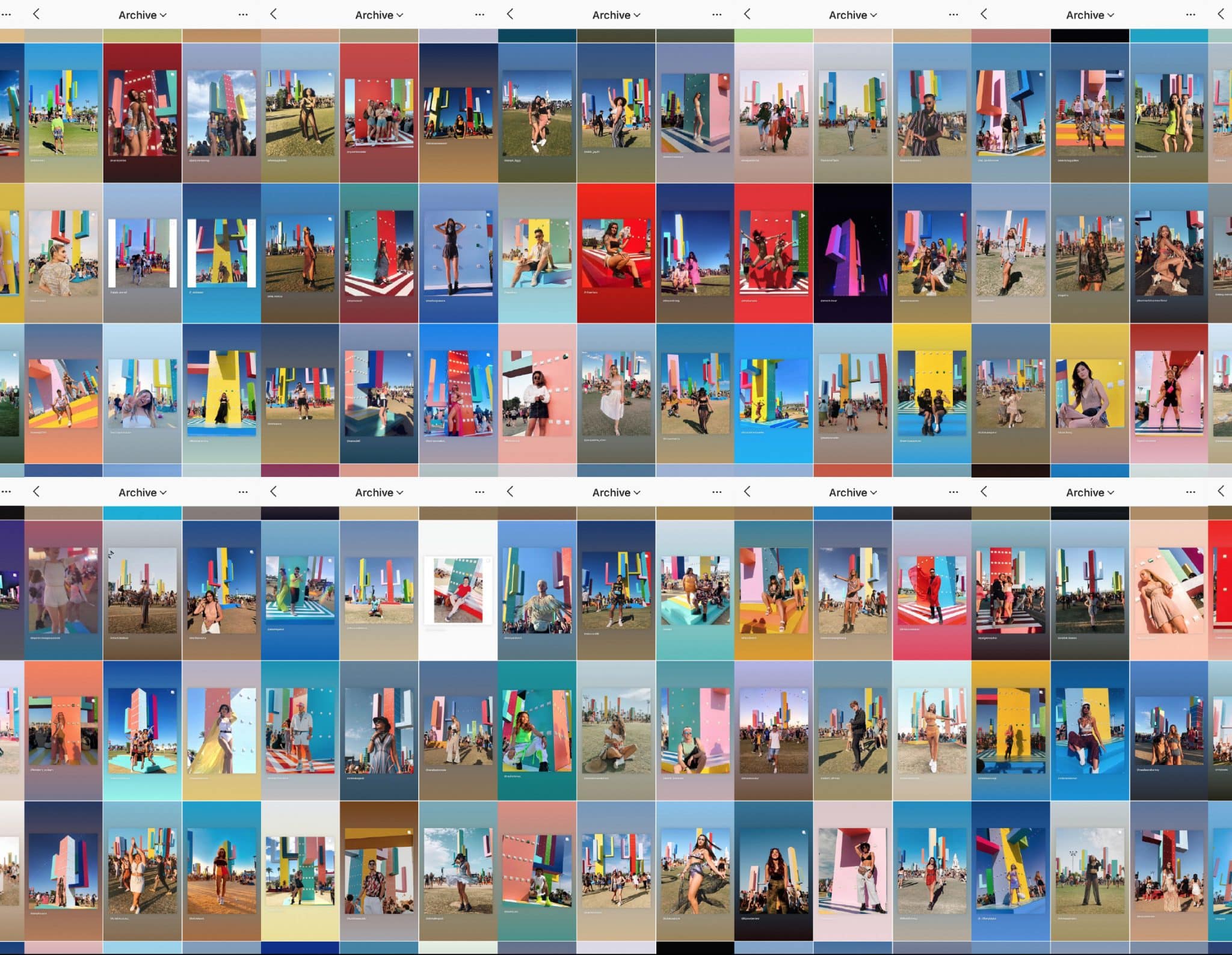 P!: Did that change the way you evaluate the work you make by seeing it through the cameras of all those people? Did you archive all the selfies?

AK: I did, or I tried. I went on Instagram and searched hashtags associated with the event and found images, which I reshared through my stories as a way of archiving them, rather than taking screenshots. I don’t know if it changed anything—we certainly knew people would take selfies, I guess we just didn’t expect that type of response.

P!: The Coachella installation reminds us of MoMA PS1 and this idea of the young architects program.

I think the parallel to PS1 is a good one, because it makes me think about what the opportunities are for young architects that want to do their own thing, in the United States. And I think Coachella is comparable to PS1, maybe even better in that sense.

Of course there’s differences—PS1 stays up longer, Coachella is only two weekends, but they’re related in that they’re both platforms for younger architects to realise work, right?

P!: Referring to the recent trend in revisiting PoMo, the west coast arguably took on PoMo, or maybe PoPoMo or PoMoMo, more successfully than the east coast ever did, or likes to admit.

AK: Yeah, sure, I’ve only lived for LA for seven years. I grew up in the midwest in Chicago, my parents are immigrants to this country, so what I like about LA is that there’s a kind of freedom—an immense freedom—in the culture here. There’s a Frank Lloyd Wright comment that says something like  if you “tip the world over on its side and everything loose will land in LA.” I think that’s true, and because of that there’s an added level of freedom of what you can do. The sensibility is different.

P!: (laughs). We feel as though pink exemplifies trend at the moment, among other things we’ve expressed.

AK: Sure, but there’s a whole spectrum of colors, right. And we try to use them in our work — It’s a variety.